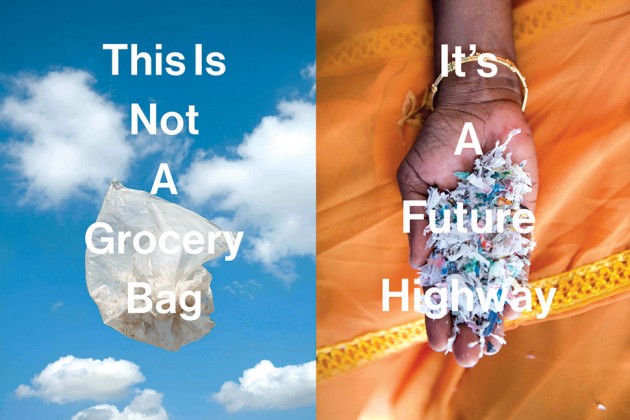 For as far as the eye can see, there’s stinking, smoking, untreated garbage. It’s concentrated in the municipal dump, in the South Indian city of Madurai, but not contained by it. The surrounding fields are also piled with trash. Stray dogs nibble at mounds of rotting food. The trees are denuded and covered with shredded plastic, the blue and pink and yellow bags like some kind of sinister confetti.

The road to the dump, and beyond it to Madurai’s airport, is like a Hollywood vision of dystopian ruin: lifeless, black, choked with human refuse. And that’s why Rajagopalan Vasudevan’s enthusiasm is so jarring. As he makes his way through the rubbish, he’s like a child on a treasure hunt. “Wonderful resource,” he says, admiring a jumble of plastic bags, jerrycans, and torn food packets. “With all this plastic, I could lay the whole road to the airport.”

It is difficult to exaggerate India’s garbage problem. Jairam Ramesh, the nation’s former environment minister, has said that if there were a “Nobel prize for dirt and filth,” India would win it. As much as 40 percent of the country’s municipal waste remains uncollected, according to the Organisation for Economic Co-operation and Development. Of the waste that is collected, almost none is recycled. Most of it sits in open dumps such as the one in Madurai, leaching into the soil and contaminating groundwater. Some of it is burned, releasing dioxins and other toxic chemicals into the air.

Much of India’s garbage is made up of plastic—a scourge of the nation’s new consumer economy. The country’s Central Pollution Control Board says more than 15,000 tons of plastic waste are generated daily. Although the nation’s per capita consumption of plastic is low compared with that of the U.S., it’s expected to double over the next five years as India continues to develop. This poses huge environmental, social, and economic challenges. As the Supreme Court of India recently observed: “We are sitting on a plastic time bomb.”

Vasudevan sees an opportunity. A professor of chemistry at Thiagarajar College of Engineering, near Madurai, he insists that plastic gets a bad rap. Rather than an incipient environmental calamity, plastic, in Vasudevan’s opinion, is a “gift from the gods”; it’s up to humans to use it wisely. And he’s devised a way to transform common plastic litter—not only thicker acrylics and bottles but also grocery bags and wrappers—into a partial substitute for bitumen in asphalt.

In recent years his method has been gaining recognition. He’s become known as Plastic Man and travels throughout India instructing engineers how to apply it. The college holds a patent for his technique but often licenses it for free. To date, more than 5,000 kilometers (3,000 miles) of plastic roads have been laid in at least 11 states. The Central Pollution Control Board and the Indian Roads Congress, two leading government bodies, have endorsed the method.

Almitra Patel, one of India’s leading experts on garbage, who has advised several state governments on their waste policies, considers Vasudevan’s technology a “win-win-win.” It consumes an unwanted and mostly nonrecyclable resource; it results in stronger roads; and because it replaces as much as 15 percent of more expensive bitumen in the mix used to lay roads, the technology also holds the potential to lower the cost of infrastructure.

She adds that one of the chief advantages of Vasudevan’s method is that it can accommodate the multilayered wrappings often used to pack snacks such as chips and cookies. These wrappings (typically consisting of a layer each of plastic, polyester, and aluminum) make up an increasingly large volume of waste in the country. They’re just about impossible to recycle, but they can easily be shredded and reused in Vasudevan’s roads.

“It’s really a wonderful situation,” Patel says. “I think it is an absolutely transformational technology that could clean up India overnight.”
Another advantage of Vasudevan’s method is its simplicity. It requires no significant technical knowledge and no large investments or changes to existing road-laying procedures. His whole operation is a good example of the Indian method known as jugaad, or “frugal innovation.” Jugaad makes a virtue of necessity: It extols the work-around, the shortcut that uses (and sometimes improves on) limited resources. “I do it all the Indian way,” Vasudevan says. “What is the use to spend thousands of rupees when we can do it much more cheaply?”

Vasudevan, 69, spent the first few decades of his career inducting students into what he calls “the wonders of chemistry” before turning his attention to plastic in 2001. He’s very much the professor—voluble, digressive, a little distracted. He laughs easily and is self-deprecating. “Because of waste,” he jokes about himself, “a waste has become useful.”

His laboratory sits amid the heavy granite buildings and dusty playing fields of Thiagarajar College. Students drive around on scooters, the boys in jeans and T-shirts, the girls in two-piece salwar kameez outfits that signal modernity. The lab building is unimposing—more of a shack, with cracked concrete floors and asbestos roofing. It’s astonishingly low-tech. The inside smells of tar. It’s here that Vasudevan has arranged a demonstration of his plastic-to-pavement technique.

As one of his students, a young man named Ramalinga Chandrasekar, prepares the demo, Vasudevan sits at a table, in the draft of a rattling floor fan, and opens a Tupperware box containing shredded plastic and a few pieces of plastic-coated granite. He runs a couple of stones through his fingers, caressing them like gems. “Feel it, feel it,” he says, praising the glossy, slippery finish.

“What is the use to spend thousands of rupees when we can do it much more cheaply?”
Chandrasekar sets up a gas burner on the floor and places a black cast-iron pot, like a rounded wok, on the stove. He throws a few granite pebbles in and starts stirring with a sawed-off PVC pipe. As Chandrasekar stirs the stones, Vasudevan checks their temperature with a handheld infrared thermometer—virtually the only sophisticated piece of equipment in the lab. (It costs less than $150.) Chandrasekar explains that the optimal temperature for the mix is about 150C (302F). Lower than that, and the plastic doesn’t melt evenly; higher, and it can release toxic gases.

When the temperature is just right, Chandrasekar throws in a couple of handfuls of shredded plastic. Vasudevan looks over his shoulder. “It’s not well done. It’s not well done,” he mutters, picking up a metal slotted spoon to stir the mixture himself.

In the early days, Vasudevan says, he would mix plastic directly into liquid tar, stirring until the plastic melted. He found, however, that while the method worked with small samples in the lab, it was difficult to stir the large quantities of thick, viscous tar used on an actual road. When he began experimenting with what he calls the dry method—in which the plastic is melted directly onto the stones—he found that the plastic adhered better and more uniformly. This reduced air pockets in the tar and limited water penetration—contributing to stronger roads. He estimates that he conducted more than 400 experiments before getting his technique right.

It takes another minute, but the plastic begins to coat the stones to his satisfaction. Chandrasekar adds a ball of bitumen; it dissolves and flattens, like a black omelet. When the stones are dark, covered with tar, Vasudevan scoops them out and holds them under my nose. “You see, you see?” he asks, triumphantly. He is a proud cook. “What a beautiful coating.”

After he perfected his method, Vasudevan recalls, he faced difficulty getting it implemented. It wasn’t until 2004, when he got a chance to display his work in front of the chief minister of Tamil Nadu, the state in which he lives, that he achieved a breakthrough. She was impressed and directed that 1,000 kilometers of plasticized asphalt should be laid in the state, the first of the 5,000 kilometers since completed.

Yet for all the progress he’s made, solving India’s garbage problem requires more than a technological solution. In a country where throwing garbage onto the roads and littering in public areas are acceptable behaviors, it’s going to require a social transformation. “With respect to the technology it has been proven already,” Vasudevan says. “Culture is now the most important part.”

The shed is in a residential area of Madurai. It overlooks a canal clogged with plastic bags—a familiar, dismal sight. Vasudevan has brought me to the offices of a small women’s association, a self-help group that has in recent years been collecting and recycling plastic waste. The blue-tiled room is stacked with bags containing colorful shreds of plastic. On a wall, a gold frame contains images of a mosque, Ganesh, and Jesus, side by side. It’s in places such as this, Vasudevan says, that the most important work on India’s garbage crisis is being done.

Gurusamy Bodhilakshmi, secretary of Naganakulam Panchayat-Level Federation of the SHGs (self-help groups), explains how the women buy plastic from a network of local businesses and homes and how they conduct awareness drives in schools and colleges. They are trying to build a local market around plastic, so it is treated as a commodity rather than as garbage. The group has had some success. It collects plastic from about 8,000 households. It buys plastic at 7 rupees a kilo (12¢ per 2.2 pounds) and sells about 1,000 kilos a month, at 30 rupees a kilo, to government agencies that use it for roads. Many of the group’s members make a modest living off the enterprise.

Bodhilakshmi’s words are encouraging, but the scale of the challenge is daunting. Although 8,000 households work with her group, many more are indifferent or even hostile to their efforts. Bodhilakshmi says many families, especially among the better-off, are unwilling to recycle or think about what happens to their waste. For them, garbage is a problem of the poor.

“The upper classes have everything. They have servants to attend to their needs, so they don’t bother with anything,” she says. “Though we are doing work that is sacred, some people look down at us as if we are doing dirty work. They speak disrespectfully to us.”

Vasudevan interjects. “What I always say is, let us just ignore the upper classes and the middle classes,” he says. “They are the biggest obstacle. Let us start with people like this, who are more sincere, and once these people are successful, the movement will spread.”

He says that in his college, he’s often the only one who will bend down and pick up a piece of litter from the ground (“even though I am a dean,” he adds). Other staff and students think it’s beneath them. They just throw garbage onto the floor and expect someone else to pick it up. When he tries to correct his students, they tell him that others will mock them if they start picking up waste. “Humility is essential if we want to solve this problem,” Vasudevan says. “Without humility, nothing can be done.”

The women of the self-help group line up and show off a folder with news clippings about their work. Then they give a demonstration of a cleaning machine they use to remove dust and debris from plastic. As plastic bags whip around in the machine, Vasudevan talks about the economic barriers that stand in the way of large-scale adoption of his method, such as inefficient markets for plastic and contractors who may not believe it’s in their best interest to build more sustainable roads.

“I have to discover a technology not only to change the use of plastic,” he says, running his hand through his thinning hair and smiling, “but also to change human minds.”